Home > About Us > Magpie 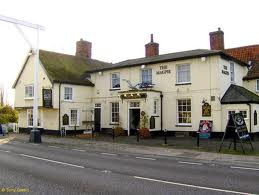 The Magpie Inn  has an unusual (Grade II Listed) sign which spans the road. The building (also Grade II) dates from the 15th century, with 16th and 19th century additions. Within living memory, a live magpie was confined within a cage on the pub's wall as a living pub-sign. According to Alfred Hedges' 1976 book "Inns an Inn Signs of Norfolk and Suffolk", this is one of only a dozen remaining pubs in the country with a sign spanning the road.

Inn, built in 3 main stages: C15, early C16 and early C19. The C19 block was added double-pile fashion and forms the main frontage. Painted brick. Hipped low-pitched slated roofs with internal chimneys of red brick. 2 storeys, 3 windows. Small-pane sashes with moulded lintels. Flat-roofed C19 entrance porch of painted brick, the fanlight with border panes and moulded lintel; pair of half-glazed panelled C20 entrance doors. To left is a 2-cell cross-wing of c.1500: timber-framed and plastered, the upper floor end jettied towards the road; a fragment of a corner post beneath the jetty gives evidence that the wing was once jettied on two consecutive sides.

Plain tiled roof with axial C16/C17 square chimney of red brick. Various C19 small-pane sashes and casements; under the jetty is a splayed bay with sashes. Good unmoulded framing exposed internally; a 4-centred arched doorway, and a large early C16 open fireplace with cambered lintel. The original C15 range, now at the rear, is a 3-cell open hall house; timber-framed with pantiled roof. The hall has a central open truss with massive cambered tie-beam and thick arch-braces. Smoke-blackened coupled-rafter roof. The  parlour cell to left has massive exposed unchamfered floor joists and widely-spaced studwork. In late C16 an upper floor of chamfered joists was inserted in the hall, and a chimney was built near the cross entry;

In C20 the chimney was removed and the ground storey of the C15 building was united to form a lounge bar. "In 1481, the Rev. John Beale bequeathed his tenement, called the Pie.... to feoffees in trust .... in repairing the highways of Little Stonham." East Anglian Miscellany, 1910,