Kindly researched and presented at the grave by Gill Davison 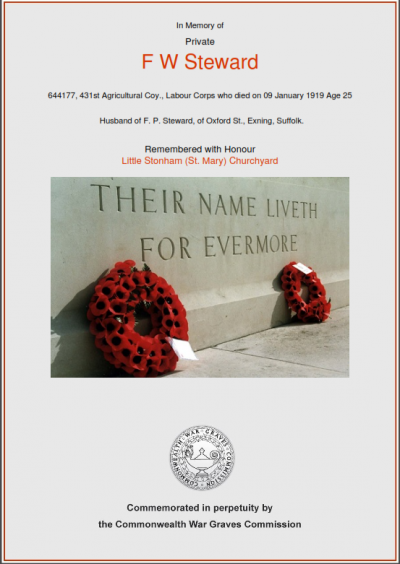 The Great War was from 1914-1918.  It came to an end on 11 November 1918 when the armistice was signed.  So a long time ago, now well beyond living memory and yet at this time every year we still pause to remember.

It was called The Great War because of the sheer scale of it.  While it was fought mainly in Europe and the Middle East, it involved countries from all over the world and millions of people were affected by it. British & Commonwealth war dead amounted to over 800,000 this is around the same number as the current population of Suffolk.

Millions more suffered the effects - physical & mental wounds of returning soldiers, families broken, families lived on with the effects.  The Great War changed the social and political landscape of our country forever.

In the immediate aftermath the Royal British Legion was established to provide welfare support. It also took on the role of Custodian of Remembrance to remember the sacrifice of those who went before us and so that we can learn from the mistakes of the past.

The Commonwealth War Graves Commission was established to create lasting cemeteries and memorials for the fallen.  While most of those who fell were buried on the battlefields in France and Belgium, some soldiers came home wounded or ill and subsequently died while at home.  These men were given a military burial at home and we have one of those burials here in our churchyard.

We are here today to commemorate the life of Frederick William Steward,  husband of Florence Phoebe Steward,  of Oxford St.,  Exning, Suffolk, who died on  9th January 1919, age 25.

Frederick William Steward enlisted in the 3rd Suffolks on December the 29th, 1914. He went out to France in May, 1915, and after six months there he was sent to Salonika where he remained for 2 ½ years.  He then worked in England in the Labour Corps, and after a severe illness with several complications he died on January 9th, 1919, at the age of 25. He was interred at Stonham Parva, his native place. He was married in Exning Church on June 25th, 1918, to Florence Phoebe Durrand. The following lines are copied from his memorial card: Day by day we sadly miss him, Words will fail our loss to tell, But in Heaven we long to meet him, Evermore with him to dwell. Christ has gathered in our darling, Placed our bud among His flowers, Taken back the one He lent us, To a better home than ours. 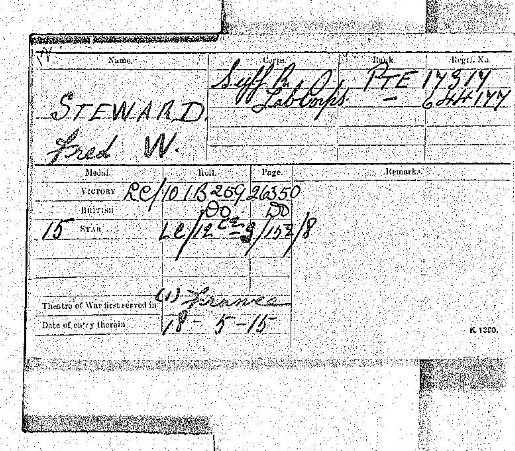 His medal record shows that he commenced his service in France on the Western Front on 18th May 1915.  A record in the Military Hospitals Admissions and Discharge Registers dated 1916 shows him to have risen to the rank of Lance Corporal.

After this time he was transferred to the 431st Agricultural Company, Labour Corps.

The Suffolk Regiment was an infantry regiment of the line in the British Army with a history dating back to 1685.

During the course of the Great War the Regiment expanded to 23 Battalions. The 2nd Battalion formed part of the original British Expeditionary Force sent to France in August 1914; the other Regular Army battalion, the 1st, spent most of the war in Salonika. More battalions were created as part of Kitchener’s New Army; these new units – the 7th, 8th, 9th, 11th and 12th Battalions  – all served on the Western Front.  In all, six battalions of the regiment were engaged on the Somme in 1916 and five in the battles at Arras in 1917.

The Regiment raised a total of 23 Battalions during the course of the First World War and was awarded two Victoria Crosses.

1st Battalion
04.08.1914 Stationed at Khartoum, Sudan at the outbreak of war.
23.10.1914 Returned to the UK landing at Liverpool and then moved to Lichfield.
17.11.1914 Moved to Felixstowe and then on to Winchester to join the 84th Brigade of the 28th Division.
18.01.1915 Mobilised for war and landed at Havre and engaged in various actions on the Western Front including; The Second Battle of Ypres and The Battle of Loos. The Battalion suffered over 400 casualties at the Battle of Ypres.
24.10.1915 Embarked for Salonika from Marseilles via Alexandria and the Division was engaged in various actions against the Bulgarian Army including;
During 1916
The occupation of Mazirko, The capture of Barakli Jum'a.
During 1917
The capture of Ferdie and Essex Trenches, The capture of Barakli and Kumli.
During 1918
The Battle of Doiran, The pursuit to the Strumica valley.
30.09.1918 Ended the war in Macedonia, north of Lake Doiran.

The 1st Battalion landed at Le Havre as part of the 84th Brigade in the 28th Division in January 1915 for service on the Western Front and then transferred to Egypt in 24 October 1915. It suffered some 400 casualties at the Second Battle of Ypres in May 1915.

The Suffolk Regiment (aka “The Suffolks”) were part of the British Salonika Force.  The Allied forces had been asked by the Greek government to help the Serbians against the Bulgarians and they started to arrive, many straight from Gallipoli, in the autumn of 1915.

Conditions in ‘Muckydonia’ (as it was referred to by the British troops) were appalling.  In summer, the Struma river plain was covered with stagnant pools, and in winter the surrounding hills were bitterly cold and the few tracks through the hills were muddy.  As many, if not more, soldiers died of disease as in battle – mostly malaria, but inevitably dysentery and other disease-related outcomes of poor sanitary arrangements.

It was likely, that after being in hospital, Frederick Steward was transferred to the Agricultural Corps.

During World War 1, Agricultural Companies were formed from soldiers no longer fit for front line combat duties. Those transferred to the Labour Corps had served in the front line and had been either wounded there or had taken ill. The Labour Corps was made up of the men who could not be returned to the front as a result of their health or injuries as well as men who, when they enlisted, were too old or had not achieved A1 fitness, which meant having the ability to march five miles in full kit and have good eyesight.

Almost seventy five thousand men, served in the Agricultural Companies, taking up the spaces left by pre-war farm workers who had enlisted for military service. Their duties included anything from helping in stores, working the land and driving tractors to repairing roads.

Their main task was to work the land as there were major labour shortages, and food production was vital.  Farmers paid the government for their labour.  Some of the men were trained in tractor driving which many of the older farmers were unable or unwilling to learn. Tractors now began to do the work of many hands.  In 1917, the Government bought 400 British Saunderson Tractors and a further $3.2million was invested in US models such as the Fordson.

By 1918, there were 6,000 tractors in operation in Britain. The 'Ploughing Up' campaign of 1917 saw an extra 2.5 million acres ploughed for growing cereals.

By October 1917 ammunition at the rate of 56,000 tons per week was being shipped to the Western Front - the second highest weekly tonnage was forage at 35,970 tons per week. The hay, straw and oats was needed for the feeding of army horses and mules.

By the end of the war, an extra 915,000 tonnes of oats, 1.7million tonnes of potatoes and 830,000 tonnes of wheat were grown, and thanks to the work of British farmers and growers, the country avoided being starved into submission.

All the other Theatres of War away from the Western Front also required supplying and it’s little wonder that the Army busied itself with food production following the fall of Baghdad in 1917 in the fertile lands in Mespotamia, once they had driven the Turks out of the immediate vicinity. 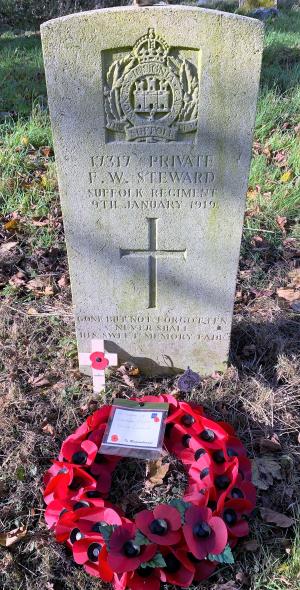 “They shall grow not old as we that are left grow old,

Age shall not weary them, nor the years condemn,

At the going down of the sun and in the morning,

We will remember them”

The Response: “We will remember them”

“When you go home, tell them of us and say, for your tomorrow, we gave our today”