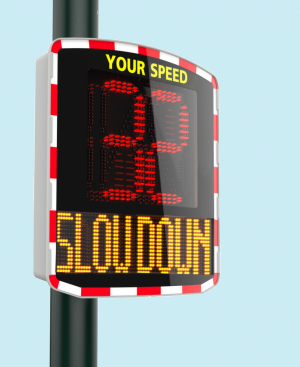 You will have noticed a speed indicator sign that the Parish Council purchased and installed at the end of April. Suffolk County Council provided two posts, situated at the south and north of the village on the A140 inside the 30mph zone.

They require such devices to be moved every 3-4 weeks, arguing drivers become complacent after that period and ignore the signs. Our plan was to move the device between the two poles every few weeks.

The headline figures show 10% more drivers keeping to the 30mph limit entering the south of the village. And a 26% improvement by drivers entering the village from the north. Daily average traffic both ways is circa 13,000 or 4.6 million per year. Some 830,000 additional vehicles will be doing 30mph or below as a result of the device.

The reason these percentage reductions differ so much is the different circumstances on the A140 before the device. To the south of the village is long stretch of 30-mph zone, a busy junction at the Tap and a hill climb which means drivers have had almost a mile to adjust their speed. However, to the north of the village the device is about 100 yards from the boundary of the 50/30 zone so many drivers are still slowing down.

The data gathered over the past seven months does not show a drop off in effectiveness with the volume of vehicles travelling at 30mph or less being consistent and in fact increasing. As a result of the big improvement of reducing speeding through the village and in order to achieve this at both posts at the same time, the Parish Council has purchased a second device which was deployed in December. Ironically, on that same day, the A140 was once again shut due to a tragic accident north of the village involving a lorry and other vehicles.

The devices are only solar powered and use batteries,  providing mains power is very expensive, they are currently suffering from a shortfall in power charging due to the short daylight hours, dull days and our busy road, we are working to address this by reducing their sensitivity and display output during the winter months.