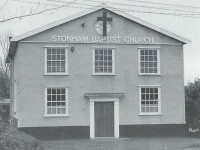 In the years before 1816, the early chapel worshippers were strong, resilient Stonham people. Sixteen would regularly walk to Otley Baptist Chapel. On 8th November 1816, Mr John Lanman sold land to the small group of believers for £8.00 where they constructed the chuich we see today. It was open and working, baptising and burying in 1817.

Mighty oaks certainly grow from small acorns – before long a Sunday School was begun (1863) and the gallery was added for the children. Gradually new items were added, such as the installation of electric lighting and a kitchen was built.

In 1960 Long Cottage became shortened. Two parts which stood in front of the Church, were purchased and demolished to make way for a car park. The old wrought iron gate, which still stands on one side, shows the original entrance to the ground.

Casting an eye on the future once more, enough ground was bought from Mr Brookes (of Long Cottage) in 1982, to build a hall, kitchen and toilet complex. Furthermore in 1993, Long Cottage itself with approximately two and a half acres was bought by Chapel members, ever thinking of provision for the community. The future is secured.